Are any of you tired of seeing all of my Christmas Trees?  Personally, I could leave them up 365....but luckily for the little Monsters, they will soon be coming down, and life as they knew it can resume...room to run!  No "pretties" to "look but not touch".  Today is the second to last tree.  The final tree will be revealed next Tuesday...MY BIRTHDAY you'll get to see Everything all together...right here for my "This is how our house rolls during Christmas" tour.  Today....simple tree...Our Pittsburgh Steelers (and all things sports) tree.  I played softball at DePaul...and basketball and volleyball growing up, so the other sports ornaments were all on my parent's tree.  When we get married and have a tree of our own, mom gives us all of our old "purchased" ornaments...she keeps all of our homemade with love ones. 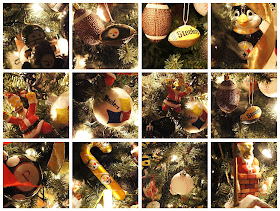 My husband is a die hard Steelers Fan...so I'm now right there with him.  VERY tough not to love the Steelers.  I lived in Chicago for 6 years so, you could imagine how this was a tough switch.  However, having been raised a Bears fan, and becoming friends with a few Bears players while living in Chi-town...still, my heart found its team when I met my husband...(I was living in San Diego when we met, a year and a half removed from Bears Country, and thrown smack-dab in the middle of the...Who? Oh, yes...the Chargers (kinda hard to be a Chargers fan).  It couldn't have come at a better time! My football heart was lonely.  You've read enough...here's the Steelers Tree! 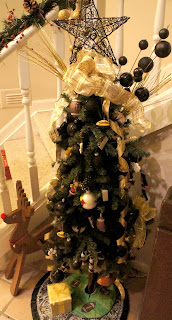 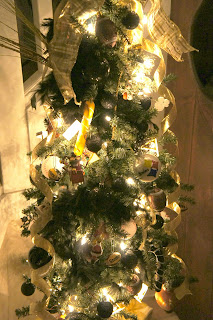 And yes, I used a boa for the black garland.  I LOVE IT! 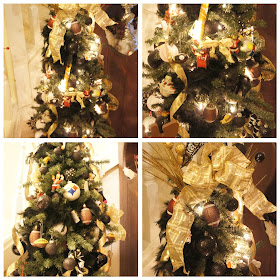 Also, let me say this...I don't mind the Colts...I do like Payton Manning...we actually have season tickets...AWESOMENESS!  Not really, their "defeated" record has put a damper on "scalping season tickets for extra cash flo plan"...o well, we will keep them in hopes for a first round draft pick...maybe by the time Monster Man wants to go to the games will sit at a game they will be good again.  So...finding Steelers ornaments has been fun!  We receive typically one every year from a friend who is also a Steelers Fan...and lives here in Indiana.  If we lived in Pittsburgh, it would be a done deal because Hobby-to-the-Lobby carries NFL ornaments. ;But only for the local teams.  At ours?  Colts and Bears.  Comes in handy because I buy my older brother a Bears Ornament every year.  AND...Big Lots sells the College Ornaments...for us...Indiana University and Purdue University! Again, comes in handy since my little bro wrestled at IU, and is attending grad school at IU...he gets IU ornaments.  There you have it.  Second to last tree!

Thanks so much for stopping by! Comments make my day! Do not panic if I don't get back to you right away! It probably means the little monsters have broken something and I'm fixing it!